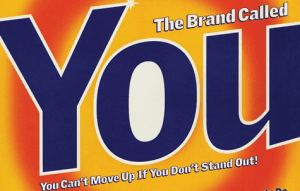 Stop Branding Yourself: You’re a Human, not a Commodity!

a raw material or primary agricultural product that can be bought and sold, such as copper or coffee.

“The President in Washington sends word that he wishes to buy our land. But how can you buy or sell the sky? the land? The idea is strange to us. If we do not own the freshness of the air and the sparkle of the water, how can you buy them?” – from Chief Seattle’s reported speech to the American government in the 1800s

Last December, while flying home from a trip out West with my daughter, I picked up the in-flight magazine. If you’ve ever flown with inflamed sinuses, you’ll understand why I was trying to distract myself from misery. Yeah, I brought a book, but I lacked mental clarity and just needed some mindless images. I lazily flipped through the pages, hoping to find some earth-shattering picture or headline. No luck. But I definitely found something that shook me. Despite my brain fog, I was certainly aware enough to know that the article in front of me was profoundly disturbing, even though it wasn’t meant to be. Furthermore, I would never have imagined that branding concepts in a dating article would lead me to the development of a whole new approach to business and its application to art. Hang tight…I’ll get to that.

The article in question featured a matchmaking and dating service called It’s Just Lunch.  Their tagline is “Dating for Busy Professionals.” I think the business name and tagline are pretty self-explanatory, so I’ll let you deduce the concept on your own while I move forward. I’m married, but I’ve never thought of myself as a “dater.” I’ve always been a little confused and an even somewhat afraid of the concept. I feel like it’s a show and I’m just not into that. I’d rather cut through all the crap and just get straight to the nitty gritty. Know what I mean? When I came across the article, I was kind of intrigued at what they were offering. It definitely seemed a bit different, but at the end of the day, it’s still just a show.

Do you know how I know that? Because one customer’s comment summed up the whole concept of the business and dating in general. She said this: “Dating is such an important part of your life and shouldn’t be left to chance. You’ve got to be proactive and market yourself.” Now, I have plenty of issues with the first sentence that I could break down and address with an entirely different perspective. But that’s not the focus here. I want to home in on that last sentence: you’ve got to be proactive and market yourself.

Let’s just pause here and vomit a little together.

Good. Now, I want to clarify two things: 1.) I promise this article gets back to your artwork and photography, and 2.) this is not a commentary on dating, It’s Just Lunch, or the people that use that or any related dating service.

Stop Branding Yourself: You Are Not a Commodity

Next, let’s address something that is apparently unknown or maybe just long forgotten: you are not a commodity. You see, we market products. We market and advertise for things…things that are bought and sold. But we live in a world where we sell literally everything, including water and air, much to Chief Seattle’s (and my own) chagrin. In our wanton lust for consumerism, we have even made a commodity out of people.

While the idea of branding oneself as a commodity is not on par with the atrocity of slavery, the concepts are both rooted in the same mindset: de-humanization. Because, at the risk of overt repetition, people are not products. People are not things to be sold.

The customer from It’s Just Lunch stressed the importance of proactively marketing yourself in the dating world. In this context, it is the essentially the same concept as “branding.”

The brutal practice of branding (to burn with a branding iron) was originally used on livestock or even one’s own tools to show ownership of property…non-human objects to be bought, sold, or traded. In the U.S., the branding of livestock was carried over to the literal and equally brutal branding of slaves…people (also de-humanized) who could be bought, sold, or traded. And for thousands of years, “branding” has also included the use of a name, symbol, etc. designed to show ownership and/or distinguish itself from other brands. (I swear to you…I’m getting to art!)

But why should we continue to perpetuate a concept that requires a sort of de-humanization process of ourselves? Do you think I’m being extreme? Remember…we market things, and you, my creative friend, are not a thing. So, I’m pleading for change: let’s get rid of this idea of marketing and branding ourselves as if we were something to be bought and sold. We are not commodities.

What in the World Does This Have to do With Art?

“Branding” yourself is everywhere you turn. All the marketing, advertising, and consulting companies use that buzzword, even if they are reaching out to artists and photographers. We’ve all seen it. You can’t even scroll through Instagram, Twitter, Facebook, or a Google search without coming across some ad about “branding” yourself. Just stop. If you are an artist looking to get your work out there, make it big, or just turn a few heads, please get away from the idea of branding yourself. Get away from the idea of selling yourself in the name of de-humanization and unmitigated consumerism. You are not a commodity. I can’t say it enough.

You see, I’ve been thinking about that in-flight article and quote about ‘marketing yourself’ for the past year. As Michael and I looked to expand our services into formal mentoring, marketing, and managing of artists, we quickly came to two foundational principles. First, we decided we are most definitely not in the business of branding artists as if they are commodities. There are plenty of tutorials, websites, and ad agencies out there that can train you in building the brand that is you, or even do it for you. So, if that’s what you’re seeking, then this particular service we offer is probably not for you. Because Michael and I are coming at this from a very fresh approach. That leads us to our second foundational principle: treating art as an experience.

For those of you who don’t already know it, Michael Damico is my brother. As we worked closely to find ways to expand, I began to feel like we were missing out on some important opportunity. There had to be some way that we could combine my marketing, public relations, and writing skills with his extensive knowledge of the art world and the business of art in general.

From here, we organically developed the concept of providing mentoring, marketing, and managing to artists and photographers, but we were already working with an entirely different agenda than all those ad firms, agents, and consultants. You see, rather than branding an artist of any kind, we understand that you have the power to shape culture, to change minds, and to make the world better. When we work with you, that is where we are coming from. That is our foundation.

People ask Michael all the time: how can I sell my work? Well, we are working very hard to change mindsets into the following: how can I develop collectors of my work? No matter what you’re creating, there are people out there who will be moved by what you’re doing. It’s our job to help you find and develop those people as followers. Those are the people who feel your work. They experience what you are doing. It becomes something visceral and creates an emotional attachment, causing them to become collectors of your work. And that is what we’ll help you develop.

Outside of the Box

I understand that most of what I’m saying here goes against all the other marketing advice out there for individuals.  It’s not the status quo. And if you know anything about me or my brother, you know that “status quo” is not part of our character. Instead, we are “outside-of-the-box” thinkers. So, if you want people in your corner who genuinely wish to help you make the world better, to share an experience, and also help you make money in the process, then you’ve come to the right place. Even if your sole focus is to make money, we get that too. And we do not ignore the idea of presentation. After all, one part of our service is marketing for artists. We’re just going to approach it very differently than everyone else!

You are not a commodity. Your art and photography, although often for sale, is an experience to be had and shared. And if that is your passion, we can even help you move towards doing it for a living. To learn more about this service, please call Michael Damico at 615-895-6015.