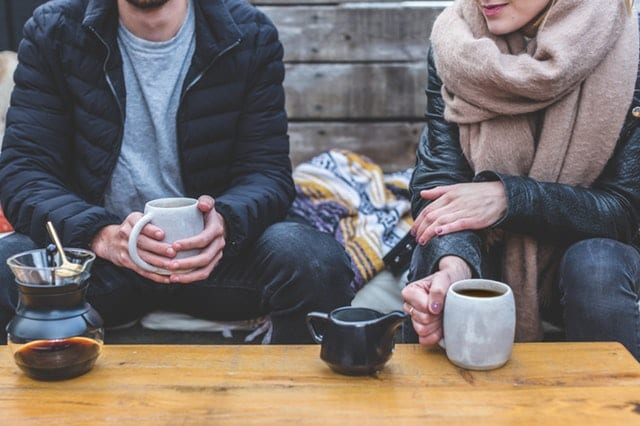 Coffee Talk: Why Does Art on our Walls Make us Feel Good?

My sister Tiffany told me about a time she was in a life-transition and had to put most of her belongings in storage for several months. Just before getting everything back and moved into a new home, a friend told her something that made her stop and think: “You know, if you’ve been without that stuff for this long, you probably didn’t need it anyway.” After getting everything settled at her new place, Tiffany was hit with a realization and later told her friend: “You’re right. I probably don’t need those things. But what was in that storage unit were the things that made my home a home.”

It got me to wondering: what is it about art, pictures, and “stuff” on our walls that make us feel good? These obviously aren’t things we need…are they? Afterall, there have been wandering tribes for thousands of years. Most of their belongings were narrowed down to absolute necessities. Conversely, we live in a society that is grounded in the idea that “more is better.” While this is a philosophy I actively try to avoid in daily living, I cannot deny that collecting things for our walls brings some sort of comfort.

Or maybe it’s like my sister said: it makes home home. In fact, her walls are filled with make-shift frames (old window panes) that feature her kids’ artwork from when they were young. As much as she denies it, it’s still very…Pinterest-y. And frankly, it makes me cringe. I mean, as a professional custom-framer, they just aren’t framed “correctly.” (LOL! I still love you though, sis!) But, still…when I walk into her house, I can’t deny the warmth those art-filled window panes imbibe. It just feels good.

I tend to overthink things and have a really logical approach. Perhaps this phenomenon is 2-fold. The first part is obvious to me: it’s something concrete to remind us of a feeling or a memory. Some kind of attachment to sentiment. In whatever form it may take (ie a memory, a feeling, a goal, an aesthetic, a philosophy, or whatever quality of sentiment), it is an ambassador of some kind of thought or response in your most personal of spaces: home.  I think the second part is because it breaks up the monotony of a large continuous shape of a flat wall with one solid color. I’d be interested to hear from any interior designers or decorators who may have a philosophy or psychology background.

So, let’s talk about this. What do you think? Why do art, photos, and what-nots on our walls make us feel good? Tell us in the comments. We probably won’t find the answer, but it definitely merits some discussion, don’t you think?